11 Best Places to Visit in Northern Germany: Add to Your Bucket List

There is no other place better than Germany to spend the first trip if you have a tour plan in Europe. Among the best places to visit in Northern Germany, you can find incredible destinations full of outstanding natural beauty, historical attractions, religious landmarks, and exciting culture.

Although hotspots like Munich and Frankfurt are definitely worth exploring, you won’t want to miss the many great cities found further north.

Whether you’re planning on being based in a single location, such as the magnificent capital of Berlin, or a historic city, such as Munich – or perhaps even embarking on a road (or rail) trip to smaller must-visit places in Germany, like the beautiful spa town of Baden-Baden in the Black Forest or the medieval fortress town of Rothenburg – the list of things to do here is limitless.

Northern Germany boasts an array of lesser-known destinations like the port city of Lübeck, the bustling city of Hamburg, and the Gothic city of Stralsund. Enjoy your time in Deutschland by exploring these fantastic and unforgettable best places in Northern Germany.

Here is the bucket list of the best places to visit in Northern Germany.

Schwerin is the capital of the province of Mecklenburg-Western Pomerania. It is a beautiful yet quiet city known for its lakes and castles.

Pay a small fee to walk all the way to the top of the city’s cathedral and soak in breathtaking vistas of the entire region, if you’re in the mood for great views and a quick workout.

Things to do in Schwerin:

As one of the best places to visit in Northern Germany, Hamburg is one of the largest and most popular cities in Germany. It has more bridges than London, Venice, and Amsterdam together, so try a guided boat ride to explore as many of them as possible.

You can also spend time catching a sporting event in Hamburg. Also watching a performance at the Deutsches Schauspielhaus or enjoying some drinks and nightlife in the Sternchanze district can make your day.

But let’s not forget that Hamburg has one of the world’s most famous red-light districts, a popular party hotspot.

Things to do in Hamburg:

Wolfsburg has to be the family destination in Germany’s northern region due to the abundance of unique, exciting activities in the area. But don’t worry, adult-only travelers: these activities are great for everyone!

Wolfsburg is best known as the home of Volkswagen, therefore there are car-related attractions such as a museum and race circuit.

Aside from that, this little community surrounded by farms and forests will include water activities, science institutes, and amusement parks.

Things to do in Wolfsburg: 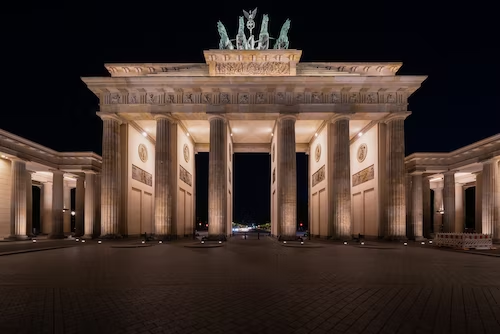 Visiting Germany is incomplete without visiting Germany’s bustling, hip, and trendy capital Berlin. This place is not necessarily beautiful or it does always make a good first impression but there’s something intangible about Berlin; it always leaves a lasting impression either good or bad.

Things to do in Berlin:

Someone who enjoys history or architecture will love visiting the city of Stralsund. This Northern German city is packed with Gothic architecture and in Stralsund, you will find a charming old town with well-preserved Gothic, medieval buildings.

In Stralsund, many of the shops, local pharmacies, and restaurants are housed in old churches or medieval buildings.

Things to do in Stralsund:

Lübeck is famous for having been the cradle and the de facto capital of the Hanseatic League. Not only is it one of the most romantic towns in Germany and the best place to learn about the Hanseatic League, but it also boasts beautiful medieval architecture, abundant culture, and delicious marzipan treats.

Things to do in Lubeck:

Heligoland is a very cool experience if you are really looking to get away from the typical continent and do something unique.

Heligoland off the German coast is located in the North Sea, and it is known for its absence of car traffic.

Things to do in Heligoland:

As one of the best places to visit in Northern Germany, Rostock boasts several fun attractions like historic buildings, though devastated in World War II.

There’s a zoo, and one of the prettiest beaches in Northern Germany. Make time to visit Petrikirche and climb its enormous tower in Rostok, admire the remaining city gates and city walls called Stadtmauer, and check out the City Hall.

Things to do in Rostok:

Bremen is a port city surrounded by the rich farmland of the Lower Saxony region. It is a wonderful place to visit in our pick for budget travelers.

Bremen has always had strategic importance for maritime trade, from medieval times through today, with its easy access to the river out to the North Sea.

Tourists enjoy the unique architecture of the old town, including the city hall which is an attraction itself.

Things to do in Bremen:

Rugen Island is located in the Baltic Sea off the northern coast, It is Germany’s largest island. This island is known for being a place of relaxation and scenic beauty, and it boasts an array of gorgeous beaches and breathtaking cliffs.

This large island is connected by a bridge to the mainland, with many towns and infrastructure.

Hiddensee is an island strip of land off its west coast that is car-free, leaving you the option of hiking, boating, or riding on horseback around!

Things to do on Rugen Island:

Kiel has a port-town, maritime vibe rather than giving the feeling of being in a large city. It is one of the main cities of the Schleswig-Holstein region and is home to a very large German naval base.

This city is located on the Baltic Seaside, not far from the border with Denmark.

Things to do in Kiel:

A trip to Northern Germany is obviously exciting, it’s not a relaxing beach trip. This country is famous for its exciting cities, mountains, and historic old towns, so explore as much as you can!

FAQs on Best Places to Visit in Northern Germany

1) Is North Germany worth visiting?

Yes, of course. A trip to Northern Germany is obviously exciting, it’s not a relaxing beach trip. This country is famous for its exciting cities, mountains, and historic old towns. Northern German always attracts people for its amazing diversity.

2) What is North Germany famous for?

3) Which are the nicest cities in Germany?

Berlin, Munich, Hamburg, Nuremberg, etc. There are many more amazing cities in Germany to explore.

21 Coolest Things to Do in France: Attractions & Activities

I’m no geography teacher…but I know Munich is the southern most city in Germany…!??

Sure, thanks for pointing it out! Will get it fixed.